The security of communications poses a seemingly never-ending challenge across Cyberspace. From sorting through mountains of spam to protecting our private messages from malicious hackers, cybersecurity has never been more important than it is today. It takes considerable technical skills and dependable infrastructure to run an email service, and sadly, most companies with the ability to handle the billions of emails sent daily make money off mining your sensitive data.

Five years ago, we started to explore an incredible endeavour on how to securely send and receive email. It was my final year in an internship at Cambridge, and the goal was to develop an OCaml library that could parse and craft emails. Thus, Mr. MIME was born. I even gave a presentation on it at ICFP 2016 and introduced Mr. MIME in a previous post. Mr. MIME was also selected by the [NGI DAPSI initiative]((https://tarides.com/blog/2022-03-08-secure-virtual-messages-in-a-bottle-with-scop) last year.

I'm thrilled to shine a spotlight on Mr. MIME as part of the MirageOS 4 release! It was essential to create several small libraries when building and testing Mr. MIME. I've included some samples of how to use Mr. MIME to parse and serialise emails in OCaml, as well as receiving and sending SMTP messages. I then explain how to use all of this via CLI tools. Since unikernels were the foundation on which I built Mr. MIME, the final section explains how to deploy unikernels to handle email traffic.

A Tour of the Many Email Libraries

The following libraries were created to support Mr. MIME:

From all of these, we developed mrmime, a library that can transform your email into an OCaml value and create an email from it. This work is related to necessary pieces in multiple contexts, especially the multipart format. We decided to extract a relevant piece of software and make a new library more specialised for the HTTP (which shares many things from emails), then integrate it into Dream. For example see multipart_form.

A huge amount of work has been done on mrmime to ensure a kind of isomorphism, such as x = decode(encode(x)). For this goal, we created a fuzzer that can generate emails. Next, we tried to encode it and then decode the result. Finally, we compared results and checked if they were semantically equal. This enables us to generate many emails, and Mr. MIME won't alter their values.

We also produced a large corpus of emails (a million) that follows the standards. It's really interesting work because it offers the community a free corpus of emails where implementations can check their reliability through Mr. MIME. For a long time after we released Mr. MIME, users wondered how to confirm that what they decoded is what they wanted. It's easy! Just do as we did! Give a billion emails to Mr. MIME and see for yourself. It never fails to decode them all!

At first, we discovered a problem with this implemenation because we couldn't verify Mr. MIME correctly parsed the emails, but we fixed that through our work on hamlet.

hamlet proposes a large corpus of emails, which proves the reliability of Mr. MIME, and mrmime can parse any of these emails. They can be re-encoded, and mrmime doesn't alter anything at any step. We ensure correspondance between the parser and the encoder, and we can finally say that mrmime gives us the expected result after parsing an email.

It's pretty easy to manipulate and craft an email with Mr. MIME, and from our work (especially on hamlet), we are convinced it's reliabile. Here are some examples of Mr. MIME in OCaml to show you how to create an email and how to introspect & analyse an email:

In the example above, we wanted to create a simple email with an incoming body using the standard input. It shows that mrmime is able to encode the body correctly according to the given header. For instance, we used the quoted-printable encoding (implemented by pecu).

Then, in the example below from the standard input, we wanted to extract the incoming email's header and extract the email addresses (from the From, To, Cc, Bcc and Sender fields). Then, we show them:

From this library, we're able to process emails correctly and verify some meta-information, or we can include some meta-data, such as the Received: field for example.

Throughout this protocol's history, we tried to pay attention to CVEs like:

A reimplementation of the SMTP protocol becomes an archeological job where we must be aware of its story via the evolution of its standards, usages, and experimentations; so we tried to find the best way to implement the protocol.

We decided to implement a simple framework in order to describe the state machine of an SMTP server that can upgrade its flow to TLS, so we created colombe as a simple library to implement the foundations of the protocol. In the spirit of MirageOS projects, colombe doesn't depend on lwt, async, or any specific TCP/IP stack, so we ensure the ability to handle incoming/outcoming flow during the process, especially when we want to test/mock our state machine.

With such a design, it becomes easy to integrate a TLS stack. We decided to provide (by default) the SMTP protocol with the STARTTLS command via the great ocaml-tls project. Of course, the end user can choose something else if they want.

From all the above, we recently implemented sendmail (and it's derivation with STARTTLS), which is currently used by some projects such as letters and Sihl or Dream, to send an email to some existing services (see Mailgun or Sendgrid). Thanks to these outsiders for using our work!

blaze is a part of this workflow where you can find:

It's interesting to split and prioritise goals of all email possibilities instead of making a monolithic tool which supports far too wide a range of features, although that could also be useful. We ensure a healthy separation between all functionalities and make the user responsible through a self-learning experience, because the most useful black-box does not really help.

As previously mentioned, we developed all of these libraries in the spirit of MirageOS. This mainly means that they should work everywhere, given that we gave great attention to dependencies and abstractions. The goal is to provide a full SMTP stack that's able to send and receive emails.

This work was funded by the NGI DAPSI project, which was jointly funded by the EU's Horizon 2020 research and innovation programme (contract No. 871498) and the Commissioned Research of National Institute of Information.

Such an endeavour takes a huge amount of work on the MirageOS side in order to "scale-up" our infrastructure and deploy many unikernels automatically, so we can propose a coherent final service. We currently use:

We have a self-contained infrastructure. It does not require extra resources, and you can bootstrap a full SMTP service from what we did with required layouts for SPF, DKIM, and DMARC. Our SMTP stack requires a DNS stack already developed and used by mirage.io. From that, we provide a submit service and a receiver that redirects incoming emails to their real identities.

This graph shows our infrastructure: 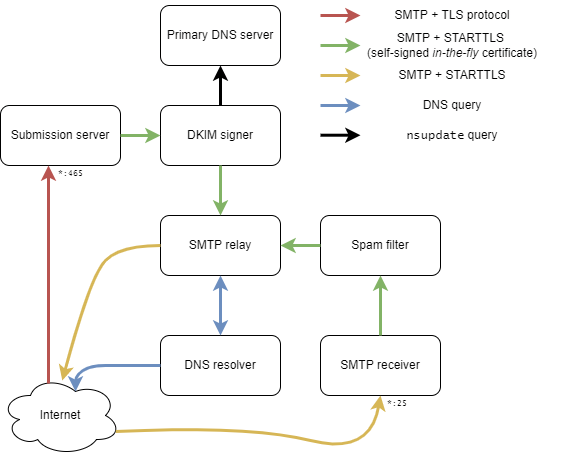 As you can see, we have seven unikernels:

The SMTP stack is pretty complex, but any of these unikernels can be used separately from the others. Finally, a full tutorial to deploy this stack from scratch is available here, and the development of unikernels is available in the ptt (Poste, Télégraphe, and Téléphone) repository.