Introduction to Build Contexts in MirageOS 4

In this blog post, we'll discover build contexts, one of the central changes of MirageOS 4. It's a feature from the Dune build system that enables fully-customizable cross-compilation. We'll showcase its usage by cross-compiling a unikernel to deploy it on an arm64 Linux machine using KVM. This way, a powerful machine does the heavy lifting while a more constrained device such as a Raspberry Pi or a DevTerm deploys it.

We recommend having some familiarity with the MirageOS project in order to fully understand this article. See mirage.io/docs for more information on that matter.

The unikernel we'll deploy is a caching DNS resolver: https://github.com/mirage/dns-resolver. In a network configuration, the DNS resolver translates domain names to IP adresses, so a personal computer knows which IP should be contacted while accessing mirage.io. See the first 10 minutes of this YouTube video for a more precise introduction to DNS.

It's common that your ISP provides a default DNS resolver that's automatically set up when connecting to your network (see DHCP), but this may come with privacy issues. The Internet People™ recommend using 1.1.1.1 (Cloudflare) or 8.8.8.8 (Google), but a better solution is to self-host your resolver or use one set up by someone you trust.

Let's start by setting up MirageOS 4, fetching the project, and configuring it for hvt. hvt is a Solo5-based target that exploits KVM to perform virtualization.

Note: we are using dune 2 here because of a cross-architecture compilation issue when building mirage-crypto. This should be fixed soon.

What is a Configured Unikernel ?

In MirageOS 4, a configured unikernel is obtained by running the mirage configure command in a folder where a config.ml file resides. This file describes the requirements to build the application, usually a unikernel.ml file.

The following hierarchy is obtained. It's quite complex, but today the focus is on the Dune-related part of it:

To set up the switch state and fetch dependencies, use the make depends command. Under the hood (see the Makefile), this calls opam and opam-monorepo to gather dependencies. When the command succeeds, a duniverse/ folder is created, which contains the unikernel's runtime dependencies.

While obtaining dependencies, let's start to investigate the Dune-related files.

dune files describe build rules and high-level operations so that the build system can obtain a global dependency graph and know about what's available to build. See dune-files for more information.

In our case, we'll use this file as a switch between two states. This one's first:

at the configuration stage (after calling mirage configure).

Then the content is replaced by (include dune.build) if the configuration is successful.

Here, two things are happening. First, the duniverse/ folder is declared as data-only, because we don't want it to interfere with the configuration build, as it should only depend on the global switch state.

Second, a config executable is declared. It contains the second stage of the configuration process, which is executed to generate dune.build, dune-workspace, and various other files required to build the unikernel.

The workspace declaration file is a single file at a Dune project's root and describes global settings for the project. See the documentation.

First, it declares the Dune language used and the compilation profile, which is release.

For cross-compilation to work, two contexts are declared.

The host context simply imports the configuration from the Opam switch:

We use the target context in a more flexible way, and there are many fields allowing users to customize settings such as:

When configuration is done, this file is included by src/dune.

Once the unikernel is built, this rule describes how it's promoted back into the source tree that resides inside the dist/ folder.

If everything went correctly, the unikernel source tree should be populated with all the build rules and dependencies needed. It's just a matter of

Finally, we obtain an hvt-enabled executable in the dist/ folder. To execute it, the we must first:

When cross-compiling to ARM64, the scheme looks like this: 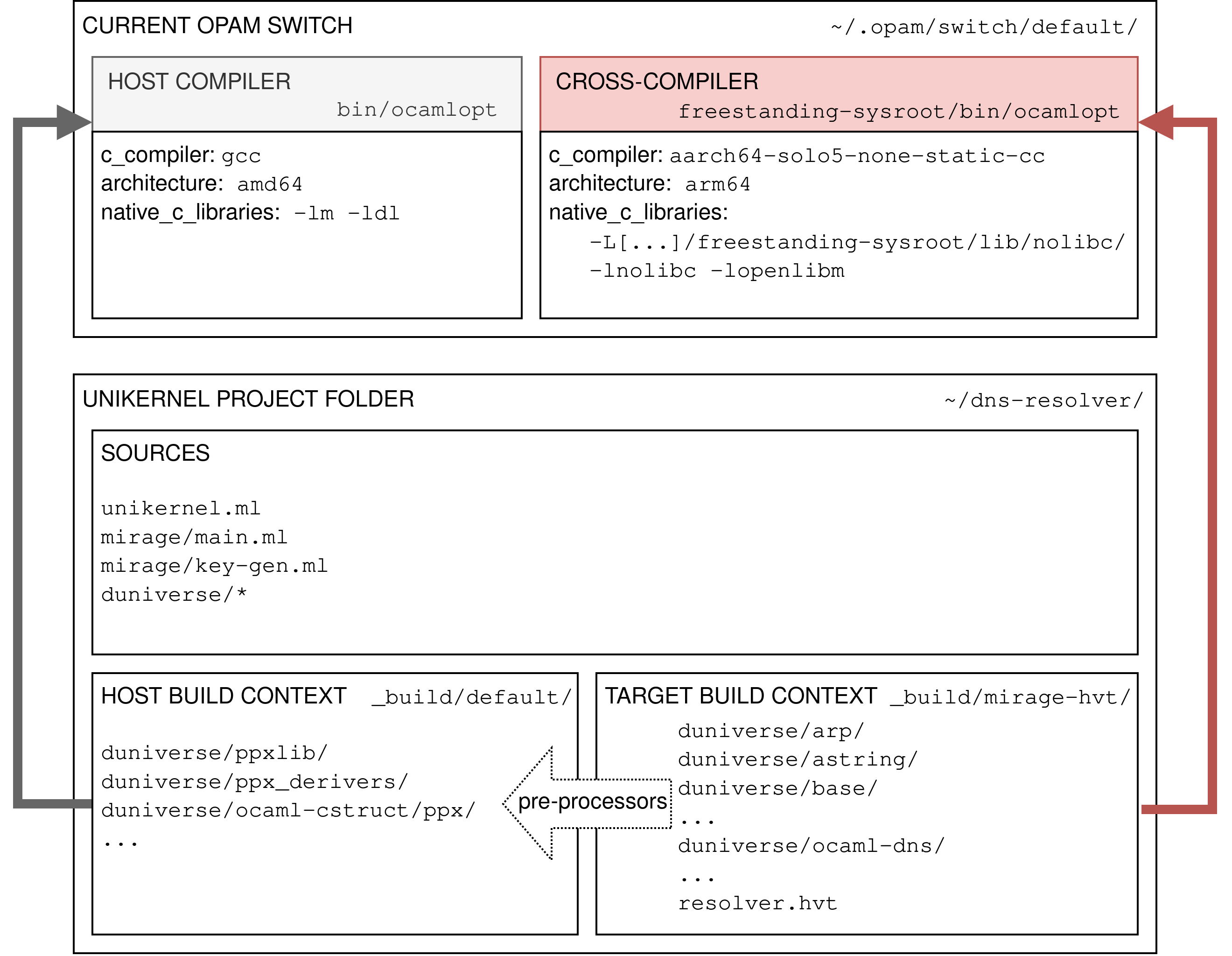 So, from the Mirage build system viewpoint, nothing changes. The only part that changes is the compiler used. We switch from a host-architecture ocaml-solo5 to a cross-architecture version of ocaml-solo5.

To achieve that, we must pin a version of ocaml-solo5 configured for cross-compilation and pin the cross-compiled Solo5 distribution:

Note that doing this will uninstall ocaml-solo5. Indeed, they both define the same toolchain name solo5.

KVM is now enabled by default in most Raspberry Pi kernel distributions, but for historical interest, this blog post shows how to enable KVM and cross-compile the Linux kernel: https://mirage.io/docs/arm64

A cross-compiled binary will appear in the dist/ folder:

Compiling to a New Target or Architecture

In that situation, mirage configure -t <target> should already output the correct source code and dependencies for the target. This is notably under the assumption that the involved C code is portable.

In this situation, a more in-depth comprehension of Mirage is required.

This blog post shows how the Mirage tool acts as super glue between the build system, the mirage libraries, the host system, and the application code. One of the major changes with MirageOS 4 is the switch from OCamlbuild to Dune.

Using Dune to build unikernels enables cross-compilation through build contexts that use various toolchains. It also enables the usage of the Merlin tool to provide IDE features when writing the application. Finally, a single-workspace containg all the unikernels' code lets developers investigate and edit code anywhere in the stack, allowing for fast iterations when debugging libraries and improving APIs.